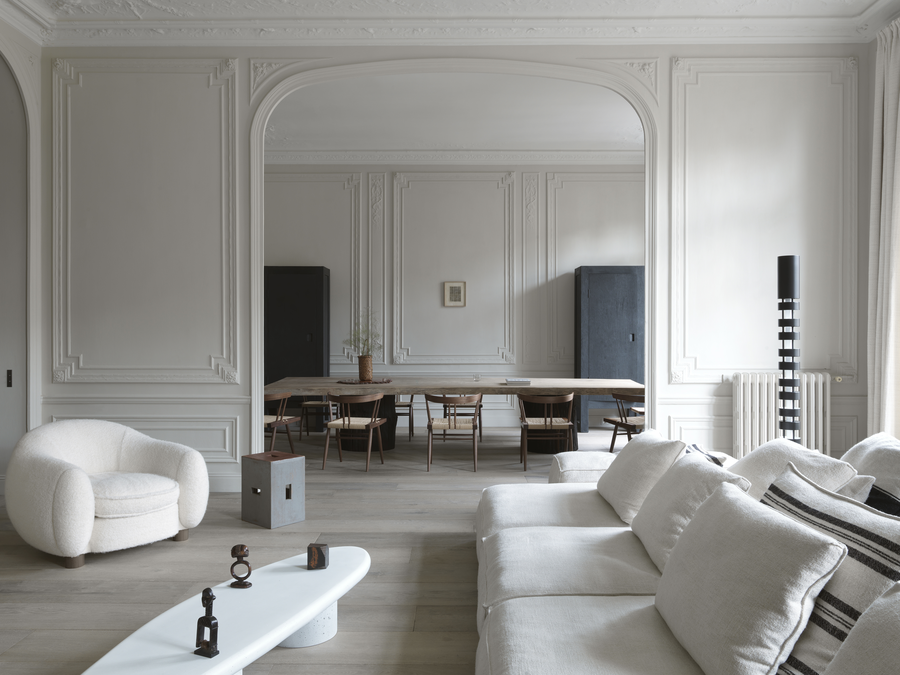 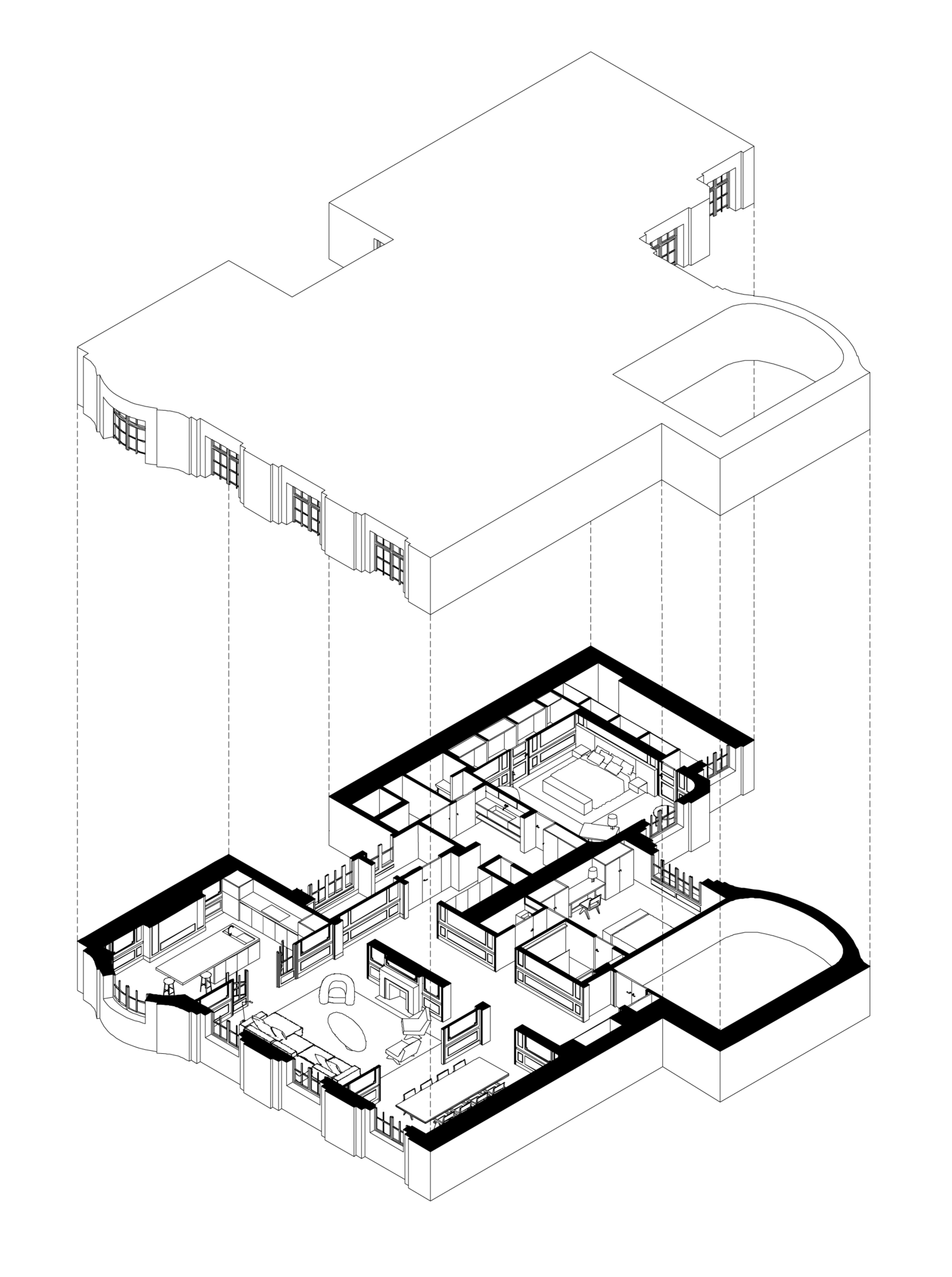 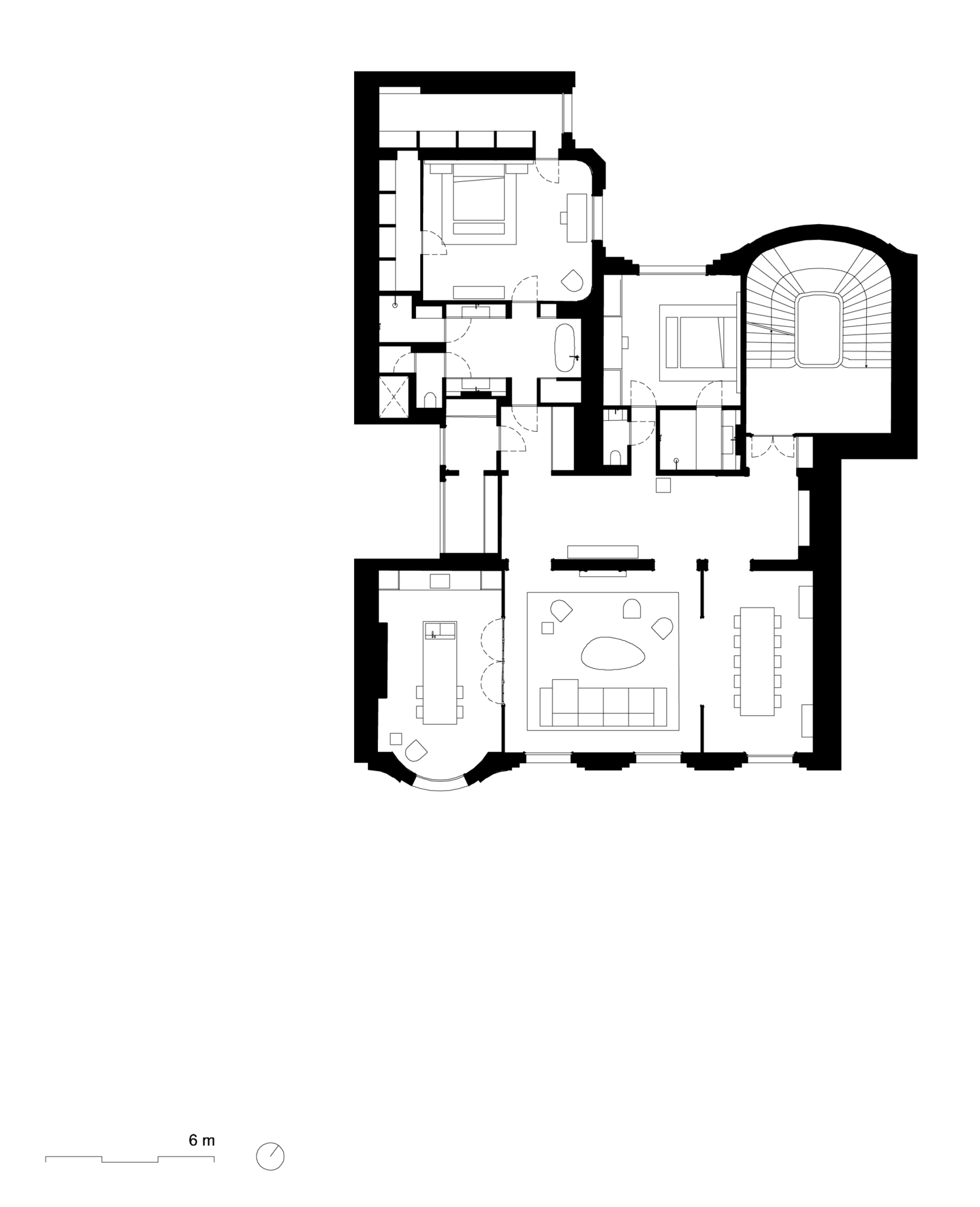 We were contacted by Barbara Boccara, the cofounder of Ba&Sh, the celebrated fashion brand based in Paris, who had just bought a typical Haussmann apartment on the Avenue Victor-Hugo in the 16th Arrondissement. It was a beautiful light-filled 280-square-meter apartment overlooking the iconic leafy avenue with side views toward the Arc de Triomphe. It had been previously renovated in a sterile way: stark, overly “designy” space with black-and-white features that hid most of the original architectural details that we appreciated so much and enjoyed working with in our first Paris commission, the RK Apartment. We needed to figure out how to revive the original spirit of the apartment while restructuring the volumes and introducing a warm and minimal material palette and to create a meaningful blending of the past and the present.

This client was a frequent traveler who did not want to come home from long trips to a stuffy and stiff Parisian apartment, or a place that felt like a “design hotel.” So, while we wanted to make the original charm of the apartment visible again, we also had to find a way to create easy circulations and introduce tactile materials, which you don’t usually experience in a typical Parisian apartment, warming it up. The apartment is on the fourth floor and is flooded with light all day long, which creates a seemingly contradictory feeling of overwhelming tranquility.
Rooms were rebalanced and we introduced strong but understated material elements, mixing wood, stone, and metal that harmonized with each other in terms of color and texture, and paired well with beautiful Belgian linens used across the space. Wide oak panels for the floor, a textured clay finish for the walls, and sandblasted sandstone elements came together to create a timeless and soothing neutral space to relax in without having to think about trends in the world outside.

A sensual essence of rawness and elegance flows through the entire apartment. We tried to draw a line of texture and tactility across the space, which we achieved by placing iconic pieces of design by Rick Owens, George Nakashima, Jean Royère, Le Corbusier, and Pierre Jeanneret across the space. We custom designed a tree-trunk table for the living room, further bringing in a sense of the outdoors. Several small works by Richard Nonas, one of my favorite artists, are found across different rooms in the apartment and are a creative motif that generates a sense of wonder, balance, and continuity across the space. This statement apartment also retains a sense of playfulness within, beautifully evidenced in a 2014 painting at the entrance by Harold Ancart entitled Perfect Idea, after You Have No Idea.